Energa Group is one of Poland’s four major energy groups, with a leading position in the Polish market with regards to the share of electric energy produced from renewable sources in total own production. The Group’s basic operations include the production, distribution and trading in electricity and heat and the sale of natural gas.

ENERGA Group is the third largest integrated distribution system operator (DSO) in Poland in terms of the volume of energy supplied. Its distribution grid consists of 191,000 km of power lines and covers almost 75 km2, (75 000)  i.e. ca. 24 percent of the area of Poland. 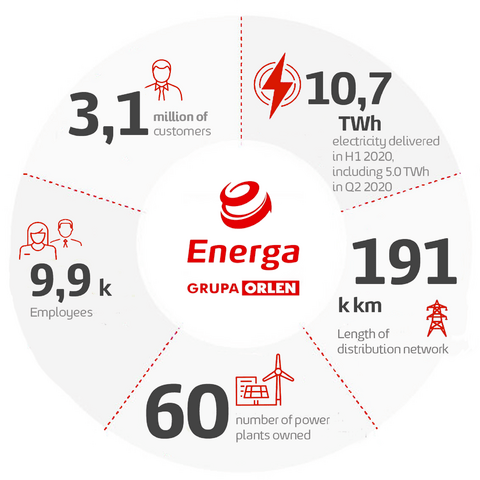 In H1 2020, the Group generated 1.4 TWh of gross energy, with a reduction in the level of electricity, such as hard coal, water, wind, biomass and photovoltaics.

In H1 2020, the Group had 539 MWe installed in renewable energy sources, of which the Group generated 750 GWh of gross electricity during the half of 2020.